What is Reputation Management?

Reputation management is a long-term process. It is the strategy; it is not the objective. The objective is to safeguard and enhance reputation by managing the good (capitalizing on good performance and behaviors) and the bad (preventing vulnerabilities from descending to crises). One definition of reputation, therefore, is:  Reputation is the net of the good and the bad perceptions of the organization held by the stakeholders. Can those relationships and perceptions be managed? Yes — through a reputation management plan, which is a solid, specialized communications plan focusing on the reputation asset.

Strategic communicators know the difference between the terms used in communication planning, which evolved from military planners like Prussian General Carl Von Clausewitz  (“On War”). Great strategists, military and business, use precise language in a plan. For example, one accomplishes an objective, which should always be stated in the infinitive – for instance, to win the battle.  One does not accomplish a strategy. Rather, one employs or carries out a strategy – for instance, focusing on killing the officers. The strategy then determines the tactics – for instance, sharpshooters aiming only at officers, foregoing large-scale attacks on the troops.

Indeed, today’s best communicators, business and organizational leaders think that way. That is why many companies chose not to advertise in Super Bowl LII.  Why use a mass communication tactic when all you need do, in certain situations, is convince traditional and social media influencers?

A Reputation is an Asset That CAN be Managed

For decades, CEOs described reputation as their “most important asset.”  Yet they did not institute a process, a plan, to measure, monitor and manage reputation because, not too long ago, reputational benefits could not be quantified. Now they can. CEOs did not install an ongoing processes for reputation management because it was thought to be an intangible asset which, therefore, could not be managed. They were right on the first point but wrong on the second. It has now been firmly established that the reputation asset, though intangible, produces significant, tangible benefits. It cannot be managed perfectly (that any asset can be was dispelled by The Great Recession) but it can be managed well.

Anyone who has worked in public relations, corporate communications or other areas of professional communications knows that communicators, rookies and veterans, tend to default to tactics first, instead of objectives or strategies. The problem with that approach, many of us learned the hard way over the years, is: ‘If you don’t know where you’re going, any road will get you there … and you might end up in the wrong place.” (‘Reputation Management,’ 3rd. ed., by Doorley-Garcia).  Communicators and other leaders often forget where they are going because they did not pinpoint their destination and path in advance.

And so it remains with reputation management. Most large corporations today have Risk Management Officers, who generally manage financial and legal risks only, the equivalence of charting half the journey. Yet, reputational capital is estimated by certain methodologies to be worth, in many corporations, about 20% of market capitalization.

One school of thought postulates that organizations focus on building expertise in crisis management and crisis communications because they have no choice. Public relations folks have been managing crises since Ivy Lee went to the rescue of the Rockefellers at the Ludlow mine in Colorado in 1914. Leaders and communications professionals with responsibility for reputation often default to crisis management because they see the crisis. Some day soon, business and organizational leaders will look at the fondness for crisis communication, often at the expense of reputation planning and management … and ask why.   They will realize it was a lack of vision, of being unable to see the intangible. And then, reputation management will become a strategy, a long-term process the cost of which will be seen as a necessary infrastructure expense.  A cost of doing business. 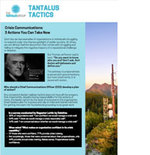 Your actions define you before, during, and after a crisis.

Are you prepared? Empower yourself with this action oriented crisis communications playbook from Tantalus experts.

Success! Now check your email to download your copy of the Crisis Communications Action Plan.